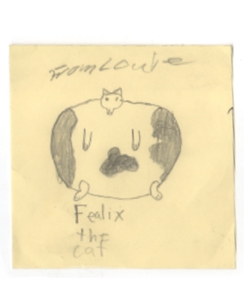 somebody named louie did this drawing of a really fat cat named felix. nice drawing, louie!

boy, i’m glad i’m not that fat! i may be bit plump, but i have really thick fur! and i have big bones. i think  felix must not be getting much exercise. not me! i stroll around the neighborhood and get a great work-out chasing squirrels and dogs and climbing trees. i keep myself in tip-top shape!

oh, talking about food and cat-naps is making me tired and hungry. tonight we’re having  hamburger helper! i’m going to take a nice nap before dinner! 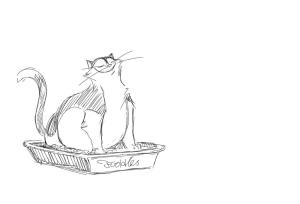 home at last! it’s fun to go on vacation, but it’s nice to be back home again. i missed my pillow and my spot on the couch, and i especially like using my own litter box again. it’s the little things sometimes that really matter.

i missed mom’s home cooking too. tonight she’s making tuna casserole-mm mm! enough to make any kitty purr! but the trip really tired me out. i slept the whole way, but i feel so sleepy, and my own pillow is so inviting… i think i’ll have a cat-nap before dinner.

hi everyone, i’m doing my favorite thing, cat-napping! i’m going to dream about doing some really daring things. hmmmm, i’ll climb a rocky cliff and chase a lizard and catch it, or maybe i’ll swim across the ocean and battle a whale…

today i found a very special place. i was wandering thru the hotel halls when a wonderful aroma hit my pink nose. wham! i was instantly mesmerized! i followed the scent to a big room where lots of people wearing white aprons were scurrying around. i found the hotel bakery! a very special place!

the people in aprons were so busy that nobody saw me, eventho i meowed a friendly greeting. someone clapped their hands and shouted something, and all the people hurried into a corner of the room.  clearly they knew that a true desert-lover was in the room-me! straight ahead was  a large silver tray covered with beautiful little fruit tarts. they were all placed neatly in rows and grouped together.  truffle tarts with raspberries,  strawberry tarts on chocolate-covered pastries, apple crumble tarts, (a special favorite of mine!)

i tried them all, and i must say, my compliments to the chef! the truffles were out of this world! and the strawberry tarts were just heavenly! the cat’s meow! the apple crumble tart was good, but the ground almond crumb was a bit pasty, not quite the texture i like. i was about to go for a second opinion, when i heard shouts behind me, and people running toward me. of course i understood-they needed to bring the deserts out to the tables, so i nodded my approval on the tarts and quickly got out of their way. i got back to our room and had a delicious nap dreaming about fruit tarts.

i had quite an adventure today. i followed my family into the hotel breakfast room this morning. i think i wasn’t supposed to be there, because mom told me to go under the table. everybody fed me sausages and bacon and  hash-browns, even a kid from the table next to my family’s! he gave me half of his pumpkin muffin! yummy!!

but when my family left the table, i wasn’t finished with my breakfast yet. i followed them even though i didn’t really want to. then a man carrying a bin of dirty dishes dropped a sausage, right in front of me. how thoughtful and kind of him. he could see that i was still hungry, so i chomped that sausage down. by then my family had left the breakfast room, and i was about to go after them when the nice man dropped a bagel on the floor for me. so i took the bagel in my mouth and followed him into a room. this man knew how to take good care of a hungry cat! i took my time eating the bagel- it was cinnamon raisin, with just enough cream cheese. mmmmm!

i enjoyed the bagel so much that i didn’t realize the door had closed, and the nice man was gone. then i noticed a bad stench in the room. it really stank in there! and then i saw why- there was garbage all around me! bags stuffed with disgusting old food, piled on top of each other. ooh, what an awful thing after such a nice breakfast!

i meowed as loud as i could, but nobody came to rescue me. the more i smelled the garbage, the worse it got! i thought i was going to faint! be strong, i told myself, but i didn’t know how long i could last! i waited and waited, it seemed like hours and days. i had very little strength left. oh, what a terrible way to go. i tried to think of nice things, like chocolate chip pancakes and strawberry shortcake, but the stench was over-powering! just a few more minutes, and i would be a goner…

then suddenly the door opened! a woman came in with a big garbage bag . i bolted out the door as fast as i could. i didn’t have much strength left, but i ran all the way to my  hotel room. thank goodness my family was still there. i collapsed on my pillow and fell straight to sleep,and i didn’t wake up until dinner time . good thing too, because i was really hungry!

today i took a stroll around the garden in the hotel. there were lots of colorful flowers- i never saw so many colors in my life! they smelled really good, like mom’s perfume. i tried to sniff a pretty pink flower but a big black bumble bee came right at me. i’m sure it wanted to sting me so i got out of there quick!

i ran all the way down the path and around the pool. when i looked back the bumble bee wasn’t there- i guess it went back to the flowers, which was a good thing because i was pooped!

i needed a catnap so i found a nice shady spot right next to a sign that had a picture of a big alligator. i got nice and comfy in that spot, and i was almost snoozing off when a thought came in my head. i thought, could there be alligators in the lake behind the hotel? that sounds scary! alligators have big pointy teeth, and a lot of them, so i got out of there quick too! i ran all the way to our room and then i climbed on the bed and went straight to sleep and i slept like a kitten!

i’m having a real, big-time adventure now! my family took me with them on a trip. i have no idea where we are- i slept comfortably the whole time. we’re staying in a nice hotel that has a big pool with a curving slide and a great jacuzzi! i didn’t swim today. i’ve just been lounging poolside on the long chairs, munching on lots of goodies that the hotel people bring by. what a life! i feel like i’ve gone to kitty heaven! there’s room-service and lots of restaurants and fun things to explore.

the hotel is right next to a lake, and there’s a beach along the lake edge with fire-pits. we made lots of s’mores! and the sand on the beach was so smooth and soft- much softer than my litter-box…

well, i’ll tell you more soon. right now i have some crab-cakes waiting for me.

i had another run-in with those rascally squirrels today. they think they own the whole yard! they were stealing my family’s avocados, the ones on the ground. so i chased the squirrels up the tree. i didn’t climb the tree after them actually- that would’ve been a waste of energy. i just wanted those squirrels gone and away from our avocados. way up on a branch they sat there snickering at me- what chickens squirrels are! i can take the both of them if i had to! they’ve probably watched me work-out to prepare for my big adventures, and they’re afraid of me now. they know who the boss is!

i gathered up the avocados for mom. she makes a yummy-chicken salad with chopped avocados! i wish she’d make a squirrel salad sometime- i’ll gladly provide the squirrels! all this food talk is making me very hungry, and all that squirrel-chasing made me really tired. i think i’ll take a long cat-nap. hopefully it will be dinner time when i wake up.

today i have a big dilemma. mom is making beef stroganoff, one of my most favorite meals! she makes it with a really rich, yummy cream of mushroom soup sauce and ground up pepper- ooh! makes me purr just thinking about it!

but there’s one little problem- it makes me have to visit my litter box a lot. i mean like every five minutes! and that’s not much fun. i could be in the middle of a great cat-nap on the couch, dreaming about chasing a cheetah or beating up a buffalo, and then i wake up and have to rush to my litter box, and then someone in my family picks me up and starts hugging and petting me. don’t they understand that i have to go?! i meow as hard as i can, but they just don’t understand and keep on petting, and i have to hold it in as much as i can. people can be a bit dense sometimes.